1. 95% of the film was shot in Redlands. The two major locations were Ford Park and Prospect Park.

2. The original script was written in the winter of 2007 and was five pages long.

3. The film is dedicated to Paul Longmore, a disability rights activist and scholar, who passed away in August 2010.

6. One major scene in the film involves a silk routine performed by aerialists Jennifer Bricker and Nathan Crawford.

7. There were nine deaf women who were involved with the production as cast or crew members.

8. The character of Sal was first written as a musician, but later became a musician and ASL poet.

10. The film is open captioned by our editor, Alex Lotz. He also did the captions for the videos on My Gimpy Life's YouTube channel, created by Teal Sherer.

12. The role of Gabe, played by musician and actor Marco Aiello, was written specifically for him. He also composed the music for the film's score.

13. The poster image includes teacups hanging from trees. Director Rhianon Gutierrez cites Alice in Wonderland as one of the inspirations for the film's design.

14. The entire film was shot in the daylight, on location. Only one scene used some artificial light.

15. Several of our crew members make cameo appearances in the film as festival goers.

18. The film was partially financed with money from the Loreen Arbus Focus on Disability Scholarship given by the Academy of Television Arts and Sciences Foundation for the director's undergraduate thesis film, "When I'm Not Alone" (2009).

19. The film features a stilt walker, played by Stina Pederson. Her character was inspired by athlete, model, and speaker Aimee Mullins.

20. The final scene in the film contains an art piece inspired by environmental artist Andy Goldsworthy.

21. Douglas Ridloff, a native of New York City, was the only actor who auditioned via Skype. The rest auditioned in person in Los Angeles.

22. A sculpture inspired by the giant spider sculpture in the National Gallery of Art's sculpture garden in Washington DC makes a brief appearance in the film.

23. Musician Collin Martin taught actor Douglas Ridloff how to play the djimbe drum for the production.

26. There were eight interpreters on set at different times throughout the production.

27. There's a documentary that's being made about the making of "Transients", titled "M.O.S.".

28. One of our crew members, Bill O'Neill, is an Emmy award-winning cinematographer. His nephew was a student of the director's mother. They discovered this connection after he had joined the production as Key Grip.

29. It was a family affair. The director's family was involved in the production, and the lead actors' partners were involved as cast or crew members.

31. The filmmakers believe in authenticity in casting. All roles that have a person with a disability are played by a person who has that actual disability. In addition, many of the featured artists and extras are Deaf even though their characters are not defined as hearing or deaf.
Posted by TRANSIENTS at 3:14 PM 1 comment:

It's the Holiday Season, so we decided to give our fans a little present each day - a fun fact about Transients! We are posting these fun facts on our Facebook and Twitter pages. They may be about the story, our cast and crew, sources of inspiration, and who knows what else? When those 31 facts are finished, we will post them all on our blog for those who may have missed them the first time around! 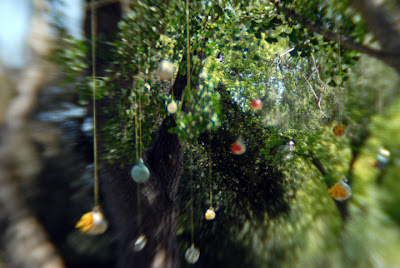 Rhianon and the Cast and Crew
Posted by TRANSIENTS at 12:00 AM No comments:

TRANSIENTS is open captioned and is currently being sent to festivals to premiere in Spring 2012.

TRANSIENTS
This is the Official Blog for the upcoming short drama TRANSIENTS, which is open captioned. TRANSIENTS depicts the encounter between two artists who meet at an arts festival: Sandrine (Teal Sherer), an environmental artist whose perceptions of art and nature have been greatly affected by a recent disability, and Sal (Douglas Ridloff), a deaf musician and poet whose personal battles frequently collide with those around him. The film explores issues of ability, communication, identity, and trust as the characters confront truths about themselves and each other.